In 1963, Heleno Fragoso decided to resume the edition of the famous Revista Brasileira de Criminologia e Direito Penal, which was a body of Rio de Janeiro Law School (Faculdade de Direito do Rio de Janeiro), located in the traditional big house on Catete Street, in front of Artur Bernardes Street. The Journal was, for some years, directed by Professor Roberto Lyra, who taught Criminal Law there.

As Full Professor of the Candido Mendes Law School, Heleno founded the Institute of Penal Sciences (Instituto de Ciências Penais). From 1971 onwards, the Institute began to publish, first by Editora Borsoi, and then by Editora Revista dos Tribunais, the Journal of Criminal Law (Revista de Direito Penal), where Heleno worked as director since the beginning. The Institute of Penal Sciences held several events in the city of Rio de Janeiro in the 1970s and 1980s, always under the direction of Heleno Fragoso, both in the auditoriums of Candido Mendes College, and in its own headquarters on Paulino Jacques Street, in Botafogo.

Heleno managed to form and assemble a range of young criminal lawyers, who used to meet on a regular basis at the Institute’s headquarters to discuss the issues relating to the penal sciences and to produce intellectual work in order to prepare the Journal, which was published every six months. Further on, due to the importance of the integration between criminal-legal knowledge and criminological knowledge, the Journal was renamed from its issue number 32, and was then called Journal of Criminal Law and Criminology (Revista de Direito Penal e Criminologia), edited by Editora Forense.

After Heleno’s death, in 1985, the 35th and last volume of the Journal was released. All the thirty-five (35) issues of the Journal are available here on this website. Also after Heleno’s death, the Institute was then called Heleno Fragoso Institute of Penal Sciences (Instituto Heleno Fragoso de Ciências Penais); however, the group dissolved, leaving a gap that was soon recovered by IBCCrim – the Brazilian Institute of Criminal Sciences (Instituto Brasileiro de Ciências Criminais), based in São Paulo. 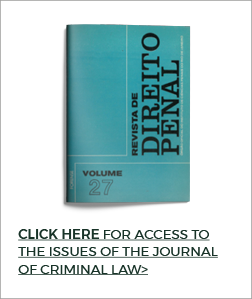